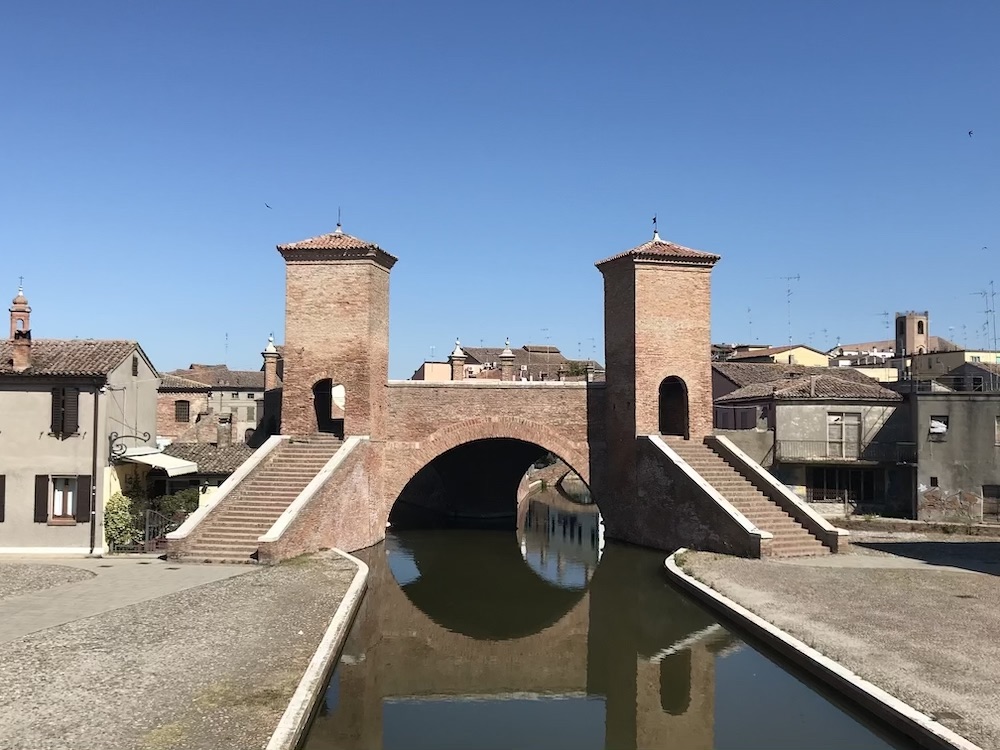 “Little Venice” is the nickname that best suits Comacchio and it’s very clear why if you start your tour from the main monument of the town.

I love admiring Comacchio from the “Three Bridges” because you see the town from above and you can enjoy a breathtaking view of the twist of the canals.

While recording this beautiful sight you could see young boys sailing along the canals using the typical boats with a single oar each.

If you turn towards the towers that used to be the entrance to the village, you are welcomed by two inscriptions taken from “Jerusalem Delivered” by Torquato Tasso and from “Furious Orlando” by Ludovico Ariosto.

Both insist on the close relationship Comacchio “Little Venice”
has with the water, be it salted or freshwater.

Now enjoy a walk in the small streets among colorful houses with beautiful flowers on the windowsills, cars parked and children playing on the banks of the canals.

The centre of the village is not that big, but it will take you longer than expected because you will often stop to watch the beautiful glimpses.

Save some energies because there are two more places you can’t miss while visiting Comacchio.

At the Civic Tower cross the little Square Ugo Bassi towards the Cathedral and walk along Mazzini Street. You will soon meet the Loggiato of the Cappuccini.

You can’t miss it! The glance is incredible! Imagine 400mt colonnade with 142 columns built in 1647.

If you are here I would advice you to visit the Manifattura dei Marinati, as you certainly know Comacchio is famous for its eels, this was the factory were marinated eels were prepared.
The museum has been renewed lately.

Start your visit form the first floor, you will be able to see a selection of videos and documentaries from the 50’s. They are a very interesting slice
of life of the workers of that time of the most important element of the economy of Comacchio, “Little Venice”.

According to me there is still a monument you absolutely need to see. It’s a place where I arrived per chance.

I do it quite often when after visiting a place I decide to walk without an
aim, sometimes with the only purpose of letting my bad sense of direction finally rest a bit!

Back at the Civil Tower, take Sambertolo Street, which becomes Garibaldi Street at a certain point.

Walking along it you will see tiny lanes, perpendicular to Garibaldi Street. They are usually private, with very little houses on them, beautifully adorned with flowers.

The Monastery of Saint Agostino is at the end of Garibaldi Street. When I first saw it, I was impressed because I really didn’t expect it. It’s huge, as the maritime pines opposite to it are.
They shade and protect ancient remains of columns and marble inscriptions.

The barriers and the painted panels warn you about the fact that you cannot venture freely in admiring it from the inside, but the gaze moves quickly up and is enchanted by the beauty of the gable, the half pilasters and the windows with the beautiful balconies.

And right there in the middle the gaze tries to find a gap because the curiosity to see beyond is very high.

It was first a monastery, then a fortress and then a boarding school.

Today the FAI, an organisation taking care of the Italian heritage, is trying to include the Monastery of Saint Agostino among the places to bring back to their ancient splendor.

You can either reach Comacchio from Ferrara by car (it takes about 40 mins) of by bus ( 1h40 mins from the centre of Ferrara) or from the Lidi ferraresi.