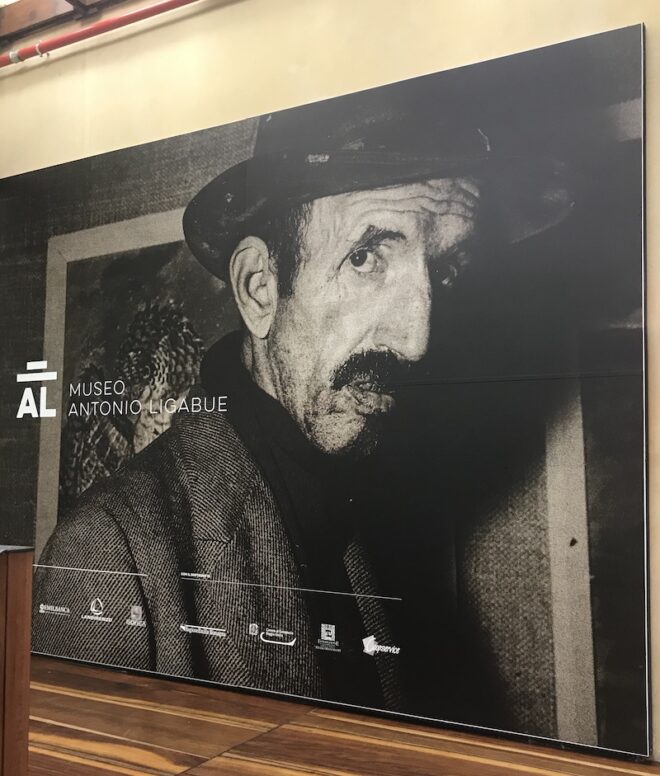 The life and the artistic production of Antonio Ligabue is strictly connected to Gualtieri, near Reggio Emilia, even if he came here when he was already 20. Today Antonio Ligabue is one of the VIPs of the village, but he has always been “Toni the Crazy”, the one who was mentioned to scare naughy children and the one who scared the girls.

Antonio Ligabue was born in Zurich in 1899 to Maria Elisabetta Costa, a single mum who later on married Bonfiglio Laccabue that recognized him a son. The father was an emigrant from Gualtieri, where Antonio is sent after his last outbreak of anger and he is no longer welcome in Switzerland. He arrived at Gualtieri on the 9/9/1919.

The relationship between the painter and Gualtieri is very tormented. The village can’t stand this character both for his a bit revolting physical appearance due to rachitis he suffered from when he was a child and also because he speaks very little and when he does he uses a strange language, he has a very disturbing gaze and he’s very suspicious towards human beings.

The language Ligabue speaks is a mixture of Italian, dialect and German, a mixture that makes him not very understandable, but his knowledge of German will give him some importance when he is used as an interpreter during the WW2 by the command based in Gualtieri.

The figure of Ligabue has been reconsidered with the time also thanks to the fame today is associated with this name. At present there’s a lot speaking of him, I’m thinking about the film “Hidden Away” directed by Giorgio Diritti with the great interpretation of Elio Germano and the novel “The heart is a wood” by Novita Amadei loosely based on Ligabue’s life including spinning on the historical and social context of the village.

Until the 8th November 2020 it is possible to visit the exhibition of 22 masterpieces by Ligabue and some sculptures in the beautiful frame of Bentivoglio Palace. Gualtieri is the perfect destination for an autumn weekend. The right combo of beauty, culture, good food and nature.

Gualtieri is considered one of the most beautiful villages in Italy, with its beautiful Bentivoglio Square, the suggestive Vittorio Emanuele Street that starting from under the Clock Tower leads to the unforgettable Cavallotti Square (let me use this adjective! This is the place where I spent my childhood playing soccer with my friends). You can’t miss a walk along Po street, Gualtieri cannot be split from the presence of the longest Italian river.

But let’s go back to the exhibition! I loved watching it listening to the words of the guide and from the perspective of a tourist and of a native at the same time, aware that she is willing to write a post for her blog on her home town.

I learnt a lot of new things about the painter and his relation to animals. Since his early age he was fond of animals to the point that when a circus came to town he could miss from home for several days just to be able to follow the shows.

Once he was sent away from school after one of his outbreaks of anger, so his mother decided to send him to work at a farmer’s considering his love for animals. But Antonio was shocked by the killing of one of the animals so deeply he affirmed he would never work in such a place again.

There are 12 painting focusing on King Kong. Ligabue loved going to the cinema, he was let in even if he was often without a penny often because of the suspicion he aroused in people. It is said that after the vision of the film “King Kong” it was necessary to immobilize Antonio, who couldn’t accept the killing of the famous gorilla.

I was touched by his sentence “I know animals well not only from the outside but also inside”. This sentence really well explains his loneliness and the fact that he had a closer and truer relationship to animals rather than with human beings.

The exhibition will be open until the 8th November 2020. On Saturdays at 4pm and Sundays at 11am and at 4pm you can book a free guided tour to the exhibition.

Are you looking forward to organizing a weekend in Gualtieri but you need more information? Leave me your questions in the comments and you will be satisfied!!