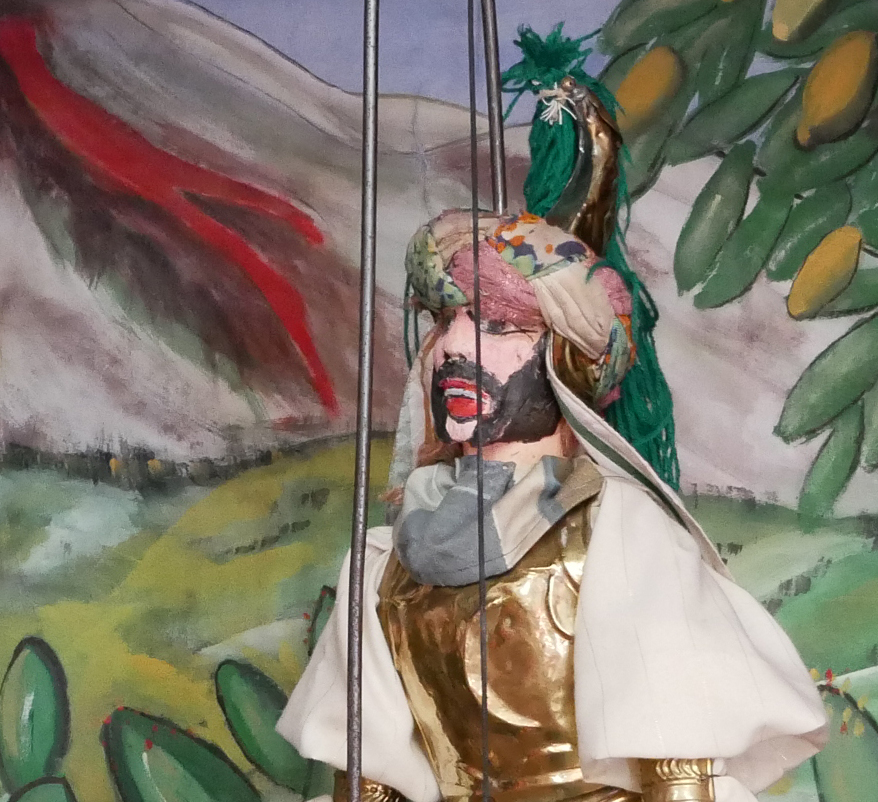 If you are in Acireale, only 15 km away from Catania, you can’t miss The Opera of the Pupi by Master Turi Grasso. Get ready to open the heavy curtains typical on a stage and enter a world where time has stopped. This space is colorful, its walls are covered with puppets of different sizes and features, ads for shows and a wonderful stage where you will see a performance. It’s right there where the tradition of the Sicilian Puppets lives on!

From now on you will read Pupi instead of Puppets, later you will understand the difference between the two!

Trust me! you won’t visit a museum, because here thanks to Master Turi Grasso The Pupi Siciliani live on. Hadn’t it been for the coronavirus, there would still be a playbill of shows. You can also contact the “Opera dei Pupi” to organise a show at the theater in your town or even at your school!

In the 80’s Mr Grasso spent 15 days in a row on the Adriatic Sea in Romagna, between Lugo, Cervia to come to “Dante Alighieri” Theatre in Ravenna, invited by Mr Stefano Giunchi, a council member, putting on stage a series of very successful shows in an area, home to the puppets.

When we arrived at the theatre in Nazionale to Catania street in Acireale we were welcomed by the whole family, 3 generations of Grasso gathered around two tourists. This made us understand that the Sicilian pupi are a family affair and a serious one! Giuseppe, the son, does the honors, but everything under the supervision of Master Turi.

Turi Grasso started working at a “puparo” (Italian for “pupi maker”) , who was first a great actor. At the age of 16 his master broke on purpose the face of a pupo Turi had proudly made. In this gesture Turi perceived some jealousy so he decided the time to hand down the tradition of the Sicilian pupi alone had come.

But what is exactly a Sicilian pupo? This is a very slippery topic, but never mind! After the first part of the experience with Giuseppe Grasso you won’t get wrong anymore among pupi, marionettes and puppets.

If you are thinking about Pinocchio, well this is a long story!

Among the three the Sicilian pupi are the biggest, they have an incredible physicality, they are like kids, hence the name! They are 1,25 mt tall and they weigh 25 kgs, hearing them moving and fighting on the stage fills the eyes and the ears with an unmistakable sound that needs a small place to have the acoustics.

The topics of the shows go from the Battle of Roncevaux, to the coronation of Charlemagne, the Crusades, the Orlando Furioso and The Jerusalem Delivered, the histories and adventures of the French Paladins, highlighting the human side of some of these legendary protagonists that are able to go beyond the cultural and religious differences between Muslims and Christians.

After a practical part, the last part of the meeting will be a short show of the pupi, at the end of which Giuseppe shows the ropes! Get ready, you won’t sit on comfortable seat. The Master did it on purpose: in the past people used to sit on those banks when watching a pupi show but the magic of the show itself made them forget how uncomfortable the banks were,

Believe me, today as then the tradition is respected!

Have you ever watched a Pupi Siciliani show? Tell me about your experience!